Although Rudy, also known as Rudolph, is blind, he seems to know how sleek and handsome he is.

His appearance is exotic—almost Abyssinian—but his origins are humble. His owners dropped him, along with a female calico, at a farm in the middle of winter, abandoning them to either the farmers' care or a certain death from starvation and exposure. The farm family took pity on Rudy and his companion and gave them shelter in a garage. However, the family was struggling financially and could not provide vet care for the cats, who were suffering from exposure and ear mites. 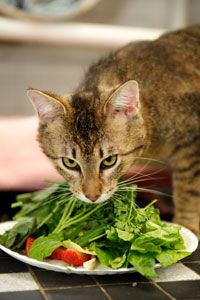 When Home for Life® learned of the cats' plight, we arranged for a vet to treat them, hoping that once they received rudimentary care, they could find homes. An adopter was found for the calico, but no one wanted blind Rudy. The farm family could not keep him, and they claimed that he had tested positive for feline leukemia. We did not want Rudy to infect the other farm cats, and we knew he would not survive the harsh winter in an unheated garage, so we agreed to take him in.

Upon Rudy's arrival at Home for Life®, we retested him for leukemia only to learn he was negative. So, Rudy joined our uninfected cats in the north cattery, after he was neutered. Rudy is delighted to be at Home for Life®, where he can live the life he is certain he deserves. His blindness and hardscrabble past have not diminished his excellent opinion of himself. Other cats who are rude enough to allow Rudy to bump into them receive a hiss and a swift swat. The other cats, being a benevolent bunch, simply roll their eyes and keep moving.

Rudy has decided that reclining on the futon is the best way to spend his day, and he plants himself in the dead center of the couch, stretches out full length, and enjoys the classical music piped into the cattery. It is great to see Rudy land on his feet, like any reputable feline can, with his self esteem and attitude intact.